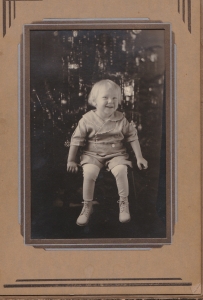 I think about Eddie a lot these days. The possibilities that society created for Eddie as a child were slim in 1935. Eddie did not have a lot of options, nor did the other kids like him with Autism and Intellectual and Developmental  Disabilities.

My Aunt and Uncle were working folks in Northern New Jersey. In those days, after the Depression, kids like Eddie were isolated, even shunned from society. Eddie never went to public school because the school system would not take him and he never held a job because no one would hire him.

My Aunt and Uncle took a stand and for them, isolating Eddie was not an option. When the Doctors presented the recommendation of institutionalizing Eddie as the preferred course they should take, my Aunt and Uncle walked out of the room, shook their heads and said, “No way”.

And so they took to task the job of educating Eddie at home and taught him to read and write.  She imagined and created a loving a world for her son; a world where he was safe and nurtured. He had chores to do around the house; he gardened with my Uncle, he had his own spending money and loved to shop. Eddie always had choices- he was included in family discussions about what restaurant they dined at, he selected his own clothes and Eddie told my Aunt where he wanted to go to shop.  And he really wanted a dog.

He loved his Norwegian Elk hound. Eddie cared for him, brushed him and took him for walks.  Eddie was really no different than any other child and my courageous Aunt and Uncle saw Eddie for his abilities. We as a family never saw or defined Eddie by limitations- to us he was cousin,  nephew and  grandson.  He was the one who would play with us kids, kick a ball, pick flowers, tell a joke, and make us laugh.  I never really understood why people would stare at my cousin. As a child it never registered with me that Eddie looked different.  To me, he was Eddie- no different from anyone and despite the limitations imposed on him from society that I was not aware of at that time; he was leading a meaningful life.

As we reimagine our work and our thinking, I reflect on my cousin’s life and think about how it could have been different for him if he had been permitted to go to school and if someone had hired him. My Aunt, Uncle and Eddie are now long gone.  I know in my soul my Aunt and Uncle would have been loud champions for people being integrated in settings in the community where inclusion exists and no barrier is too great to be torn down.   Eddie would have agreed if not for himself; but for everyone else.

Consider this body of work of Lara Stolman, an award winning journalist who produced and directed this award winning film documentary with some amazing colleagues. It’s  about a Swim Team for kids on the Autism Spectrum.  A family in New Jersey wanted this for their son.http://www.swimteamthefilm.com/trailer.php    How about that for possibilities?

We can’t stop believing that there will be a world where people are not marginalized for their “limitations”. Our passionate and dedicated staff, everyday are working to ensure people have the ability to live their dreams in all ways imaginable.  Access is moving forward through all the barriers to effect the change to support people in a way that is deep and meaningful for them.  Above all-like this family in New Jersey-  we believe in the possible. With that we create real hope.